Everyone say Hello to Chet! He is our new official reptilian ambassador. We have had the intention for a while now to rename a rescued animal Chet, and making him our mascot. This Burmese, probable male, Python fit the bill. 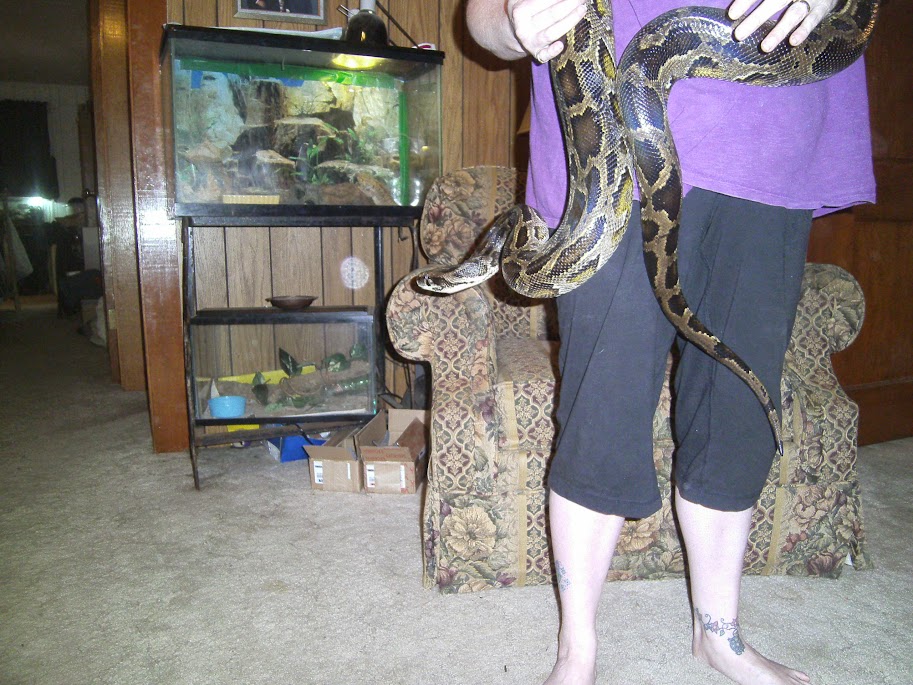 When Greg and Angelia first discovered Chet, he had been given the name of The Beast. He was housed in a 55 gallon aquarium with a heat lamp in the general area. His only substrate was his own excrement. There was no water or hide and it is unknown when his last meal was. His “owner” had disappeared and he had been left in the care of family members who had no idea how to care for him.

After his rescue, Greg playfully renamed him Biscuit. The name stuck while he was in Greg and Angelia’s care. He was suffering from hunger, dehydration and a minor respiratory infection. They immediately bathed him and got him into a better enclosure. They began aggressively rehydrating him and started him on a more regular feeding schedule. Although they fell in love with him, they knew they were not ready to keep another large snake at the moment. Therefore they began looking for a forever home for him.

Felita and I own 2 burms already, and recently lost our male albino. That placed us at the top of Greg and Angelia’s short list. When they contacted us to see if we were interested, we jumped at the chance. We were more than ready to offer Biscuit a forever home.

This past Sunday, they made the trip from Rockwood to Greeneville to drop him off at our home.

While they were here, we discussed renaming him once more and we all agreed Chet would be a fitting name and reptilian ambassador would be the perfect role. He still has a slight wheeze but will soon begin treatment with antibiotics. We plan on letting him travel to all in-state events that Felita and I attend. His gentle disposition should make him a big hit with the public. I’m extremely pleased that we were able to work together to get Chet into a better environment so he can live a more rewarding life.

I feel most of us agree that rescues are an important part of who we want to be. Placing a rescue animal in the role we have chosen for Chet should help bring this goal to the forefront. His plight with uneducated keepers can be a fine example of why research prior to purchase is so important. He will be a fine addition to our family and we are both proud to be his new parents.

Until next time, Happy Herping!


We look forward to hearing from you! Proud supporters of