Once again, I’ve let some time go by between posts. As some may know, I’ve been recuperating from a non-herp related injury, but that really isn’t an excuse. With all the recent news, I feel I need to speak up.

Let me get the simple one covered first. Another Kentucky pastor has died from a rattlesnake bite during a church service. I’ve never hedged around my feelings on keeping hots! While I can understand the appeal, venomous are among the most beautiful snakes out there, they require a special level of experience and precaution. It is a risk I am not willing to take. I probably will never understand where venomous snakes fit into religious settings. I doubt these preachers have the appropriate experience dealing with these animals, and free handling a hot shows they weren’t taking the adequate precautions. Just the idea that you could take a bite from a venomous snake and NOT need medical attention blows my mind. These types of incidents will always be a black eye for the rest of this community.

There have been two recent reports involving Albino cobras in Texas. A young man was found dead, in Austin, from what was later found to be a bite from a Monocled Cobra. At the time, the snake was unaccounted for. From what I’ve read, this young man was experienced with hots and the details of how he was bitten, or even why he had the animal in his vehicle, may never be known. The snake was later found dead along a nearby highway. This shows the inherent danger any venomous keeper must constantly be aware of.

More recently, tenants of a Houston apartment complex ran across an Albino Cobra wandering freely through the building. Authorities are unsure where the animal came from, but it was obviously an escaped or released captive animal. Police were able to capture and remove the animal, but it was later destroyed after they determined it was “too aggressive” to be placed elsewhere.

Also in Texas, Wichita to be exact, there was an uproar when an owner reported to authorities that their six-foot boa had escaped it’s enclosure and was unaccounted for. I personally witnessed the uproar on Facebook, and it wasn’t pretty. I saw people expressing worry that their lives were threatened! Despite repeated assurance that boas of this size pose no threat to humans, there were repeated threats of kill on sight. For reference, here is the damage done by my 6 foot boa last night. 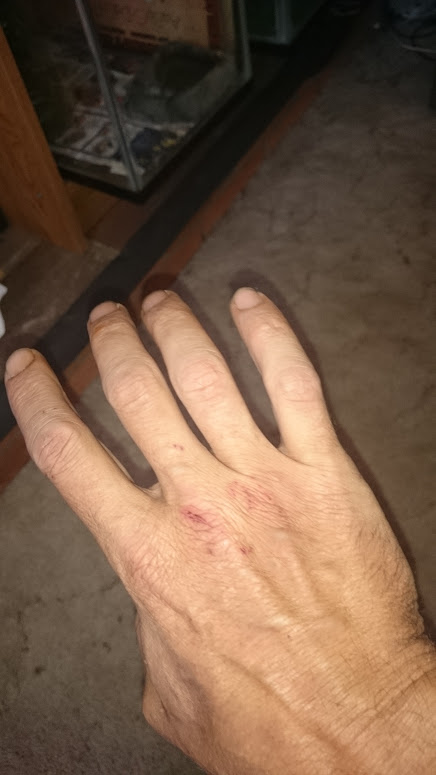 Hardly life threatening. That was his top jaw, the lower hit below my knuckle, it can barely be seen on my first finger. I’ve not heard whether they have found their pet or not.

Elsewhere in the country, a 14′ 7″ Burmese python was killed in a Missouri neighborhood. Reportedly, the animal has been blamed for the disappearance of several area chickens and a pet chihuahua. As Burms are not capable of surviving long enough to grow this large in Missouri, it has to be assumed that this was either an escaped or released pet. The last I’ve heard, no one has stepped up to claim the animal.

Outside of Atlanta, Georgia, there was a picture posted that appeared to show a Gaboon Viper on the loose. While authorities are not convinced of the authenticity of the photo, they are continuing to follow any leads they receive. Georgia has very strict permitting procedures and all licensed animals are accounted for. Since Gaboon’s are not known as escape artists, release would be the only viable way for this animal to be there.

All of these stories merely strengthen our position of education within our community as well as the non-herping public. Each of these incidents show how irresponsible practices of a few can hurt us all. While several of these cases could quite possibly be staged occurrences by animal rights groups, they have pulled stunts like these before, we have to assume irresponsible keepers are involved. We must continue to reach out to all of our contacts and stress proper housing, security and precautions to prevent making the news in this manner. One bad story about escaped or released pets will be remembered long after our positive public outreach attempts are forgotten. If we want to keep our hobby strong, we need to continue to try and prevent these kinds of tragedies.

I apologize for the negative tone of this blog, but it is a reality we all need to face. When asked about these events, we need to stress the positive attitudes most of us share. When kept correctly, none of the animals mentioned here pose a threat to outsiders, even the hots if they are kept properly.

Until next time, Happy Herping, Mike.


We look forward to hearing from you! Proud supporters of